Home | About The NYSPCC | History

Established in 1875, The New York Society for the Prevention of Cruelty to Children (NYSPCC) was the first child protection agency in the world. Throughout its distinguished history, The NYSPCC has sought to develop and implement innovative mental health, legal and educational programs that protect children from harm and ensure their healthy development. 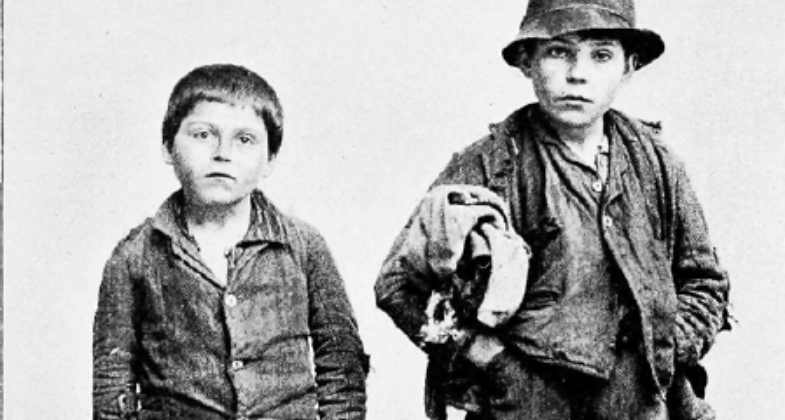 Until the late 19th century, no laws effectively protected children from maltreatment much less accorded them any rights. Except for a few extreme instances, child abuse was tolerated. One hundred and forty-five years ago, these omissions began to be corrected. On April 27, 1875, The New York Society for the Prevention of Cruelty to Children was incorporated. Organized child protection was born.

The movement was a pragmatic blend of religious faith, humane concern, private initiative, and public partnership transcending political, sectarian, and economic differences. Child protection didn’t begin in a vacuum. It was part of a wave of reform, a spontaneous reaction to a sequence of events unprecedented in the magnitude of their impact. 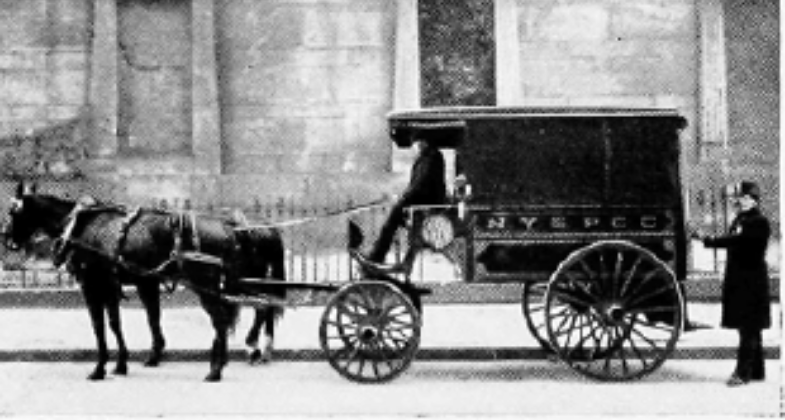 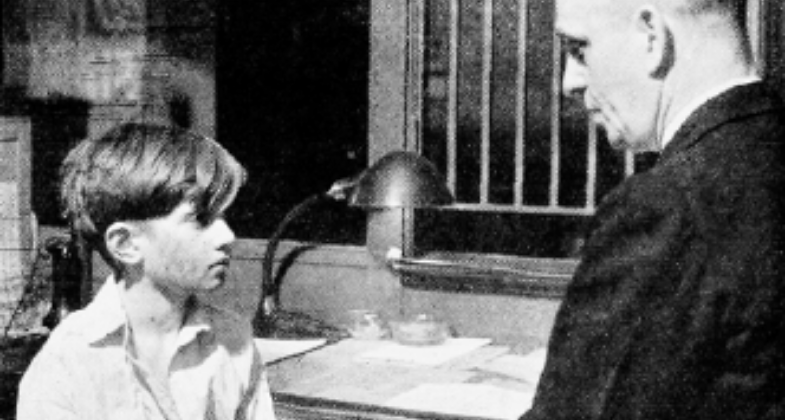 ...as the nation experienced the industrial revolution, the Civil War, and the onset of a massive tide of immigration, the population of New York City increased seven-fold, to over a million people, half of whom were foreign-born. Public and private service systems were overwhelmed, riots were frequent, crime was rampant, and the child cruelty and exploitation they engendered was as common as the sixteen-hour work day 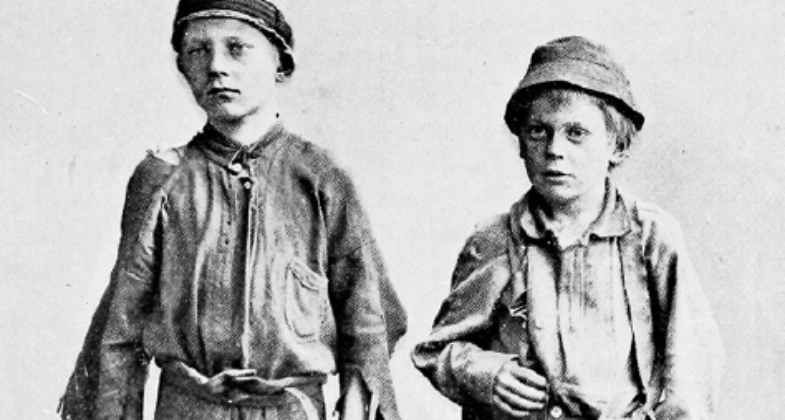 The first anti-cruelty laws were enacted on behalf of animals, not children, but the founding of the American Society for the Prevention of Cruelty to Animals (ASPCA) in New York by Henry Bergh in 1866 proved fortuitous, for its applicability to human needs was recognized almost immediately. “The children of New York are sadly in need of a champion . . .” (The New York Evening Telegram, 1866) Within four years, Bergh enlisted Elbridge Gerry as ASPCA counsel. These men were also filled with distress over the maltreatment of children.

In the winter of 1873, in a New York neighborhood called “Hell’s Kitchen,” a rooming-house attendant told a church worker named Etta Wheeler about a case of child cruelty. Dedicated and compassionate, Etta Wheeler made discrete inquiries and determined to rescue the abused child, a young girl named Mary Ellen. When others declined to intervene, Wheeler approached Henry Bergh and Bergh appealed to Gerry: “No time is to be lost — instruct me how to proceed.” 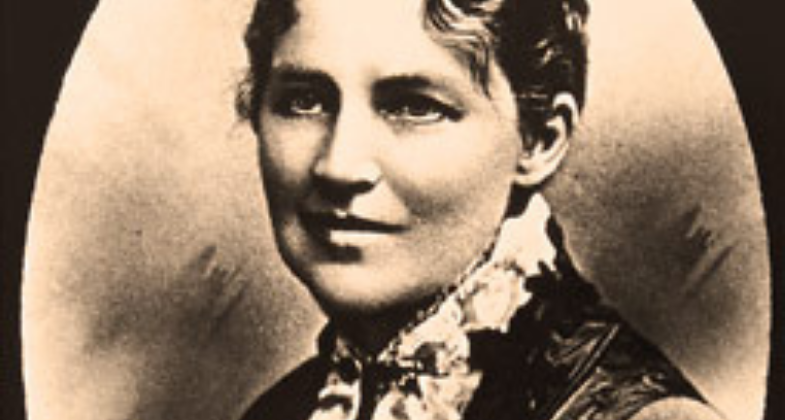 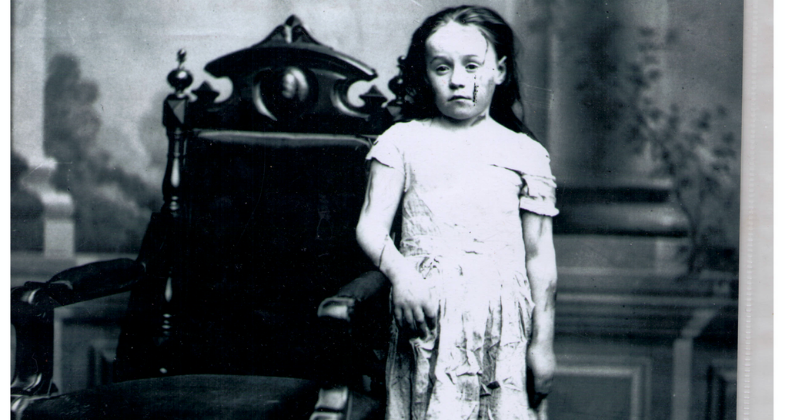 Gerry made clever use of an obscure section of the habeas corpus writ to secure their legal standing. The “Mary Ellen case” was a classic child protective intervention. Within forty-eight hours of Wheeler’s initial report, an investigation was conducted, a petition filed, a protective removal effected, a hearing commenced, a temporary placement arranged, and a criminal prosecution initiated.

“I was in a courtroom full of men with pale, stern looks. I saw a child brought in . . . at the sight of which men wept aloud. And as I looked, I knew I was where the first chapter of children’s rights was written … for from that dingy courtroom … came forth The New York Society for the Prevention of Cruelty to Children with all it has meant to the world’s life.” ~Jacob Riis 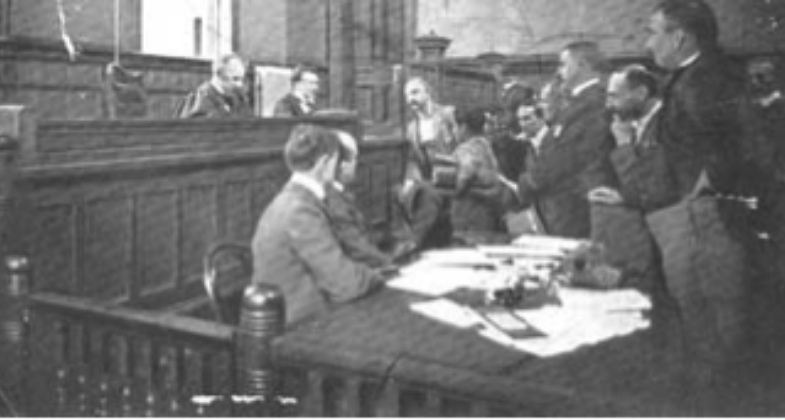 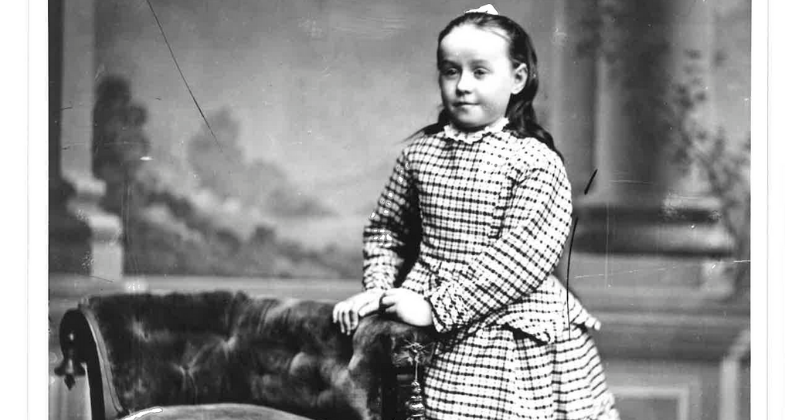 “My name is Mary Ellen ____. I don’t know how old I am. My mother and father are both dead. I call Mrs. C____ momma. I have never had but one pair of shoes, but can’t recollect when that was. I have no shoes or stockings this winter. I have never been allowed to go out . . . except in the night time, and only in the yard [to use the outdoor privy]. My bed at night is only a piece of carpet stretched on the floor underneath a window and I sleep in my little undergarment with a quilt over me....”

Mary Ellen was placed in a loving home, married, raised a family of her own, and died at the age of 92 in 1956 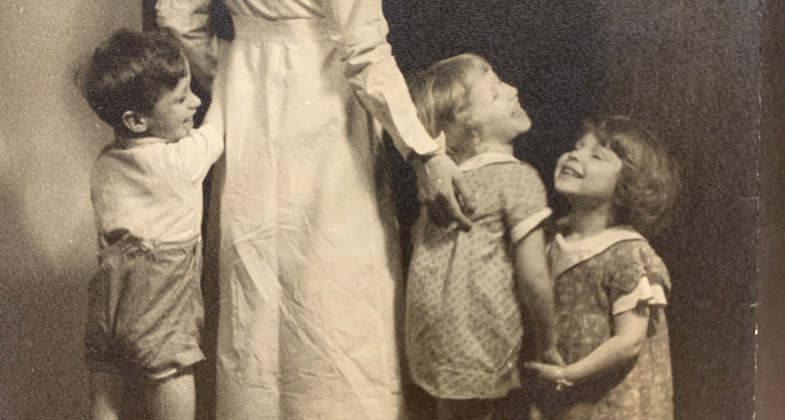 Henry Bergh and Elbridge Gerry, aware that the hour for children had finally come, recruited respected philanthropist John D. Wright and formally pledged themselves to the establishment of organized child protection. The undersigned, desirous of rescuing the unprotected children of this city and State from the cruelty and demoralization which neglect and abandonment engender’ hereby engage to aid, with their sympathy and support, the organization and working of a Children’s Protective Society, having in view the realization of so important a purpose.

On December 15, 1874 The Society was founded. Gerry annunciated its unique purpose: “to rescue little children from the cruelty and demoralization which neglect, abandonment and improper treatment engender; to aid by all lawful means in the enforcement of the laws intended for their protection and benefit; to secure by like means the prompt conviction and punishment of all persons violating such laws and especially such persons as cruelly ill treat and shamefully neglect such little children of whom they claim the care, custody or control.” 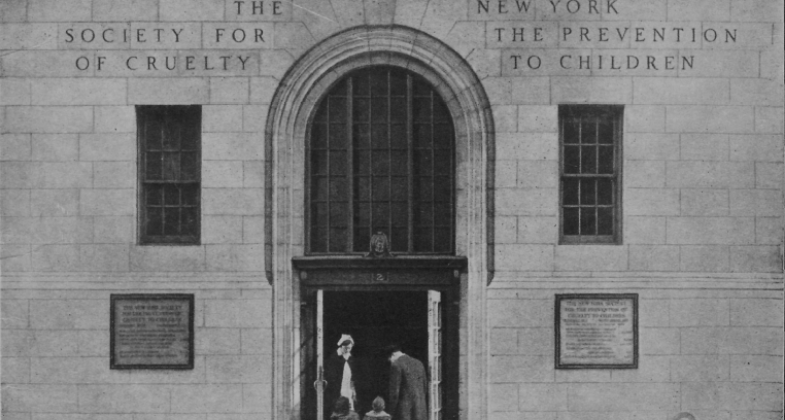 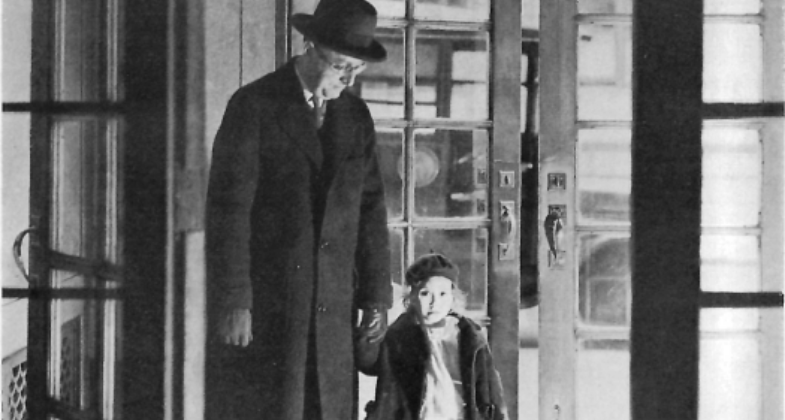 NYSPCC Incorporation 1875 On Tuesday, April 27, 1875, the SPCC was incorporated as The New York Society for the Prevention of Cruelty to Children, the first child protection agency in the world. John D. Wright became its first president, Gerry and Bergh vice-presidents. 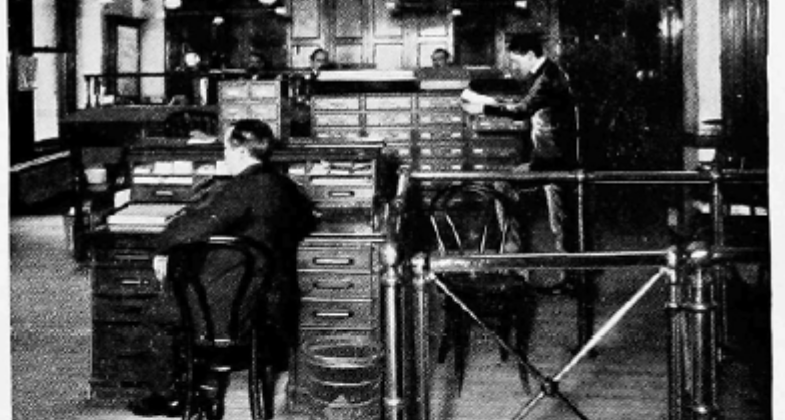 The first meeting of The NYSPCC was held on Thursday, April 29, 1875. From its first year of operation until the establishment of a state-wide central registry for reporting child maltreatment, the municipal police notified The NYSPCC of all cases involving children. A telegraph link was established between The NYSPCC and police headquarters.

So many harmful conditions existed that The NYSPCC realized new laws were needed and worked for their enactment. Almost the entire body of modern child protective legislation is rooted in laws advocated by The NYSPCC. Among the more notable of these initiatives were: Acts requiring custodians to provide food, clothing, medical care and supervision, prohibiting child endangerment and regulating child employment (1876) and acts prohibiting the sale of intoxicants to minors and mandating their separation from adults when arrested (1877). 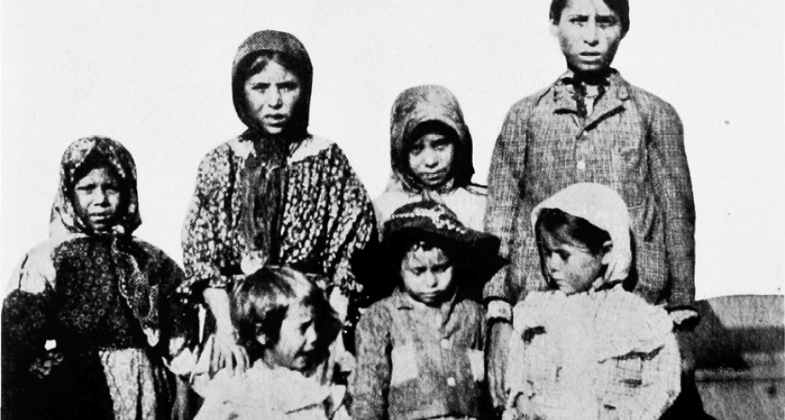 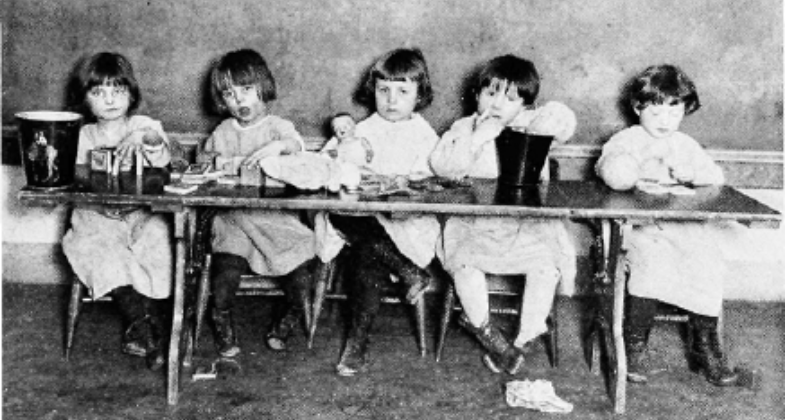 Among the challenges facing The NYSPCC was that of obtaining temporary shelter for the many lost, runaway, and abandoned children and for the maltreated children who had to be removed from their homes for their own protection. When no one else assumed this burden, The NYSPCC undertook to do so. In April 1880, The NYSPCC purchased a brownstone at 100 East 23 Street as both a headquarters and a temporary shelter, the first children’s shelter in the city.

Although the investigation of maltreatment complaints provided an ever-increasing volume of work, it was not the only service provided. Among the many other NYSPCC services undertaken in addition to the shelter were: Enforcement of child entertainer laws and the processing of child performance applications, (1876-1978, 102 years); Daily transportation of sheltered children to and from court appearances and their delivery to child-caring institutions, (70 years, 1878-1948); Investigation of children reported to the police as “missing persons” (70 years, 1880-1950) and many more. 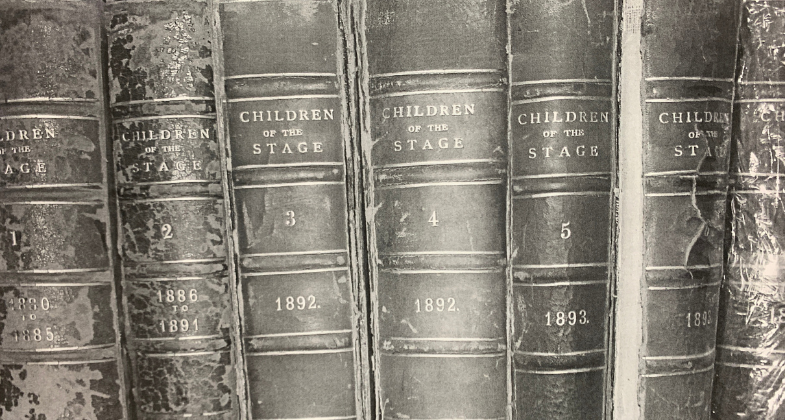 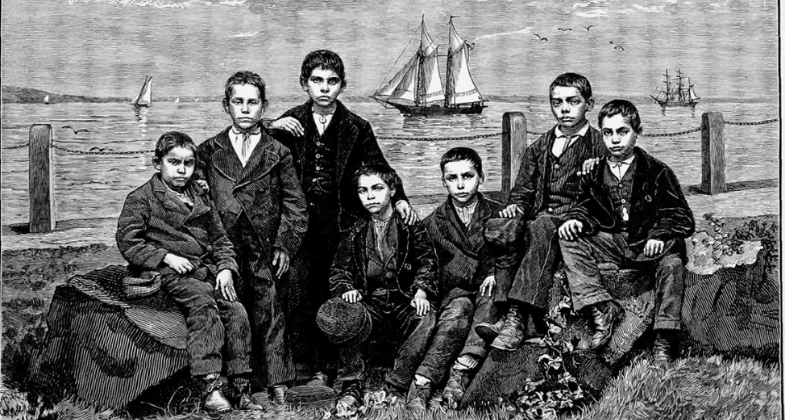 One notorious form of abuse was effectively terminated by The NYSPCC between 1879 and 1885, working with the U.S. Immigration Service and a foreign consulate. This was the infamous “padrone system,” whereby desperate, well-intentioned families were duped into sending their children to America, to a sponsor of their own nationality who promised jobs, training, and care for a time, after which the children were to be sent home. Instead, like “Oliver Twist,” the children were brutalized and forced to beg, entertain, or steal to support the padrone.

As the nineteenth century drew to a close

The radical concept of organized child protection had been accepted and replicated throughout the nation and the world. In New York City, The NYSPCC had investigated 130,000 complaints, aided 370,000 children, sheltered 84,000 of them at its own expense and prosecuted 50,000 cases at a conviction rate of 94%. Not only were new laws in place with a growing number of agencies to enforce them, there was also a growing recognition of society’s responsibility for the protection of children. 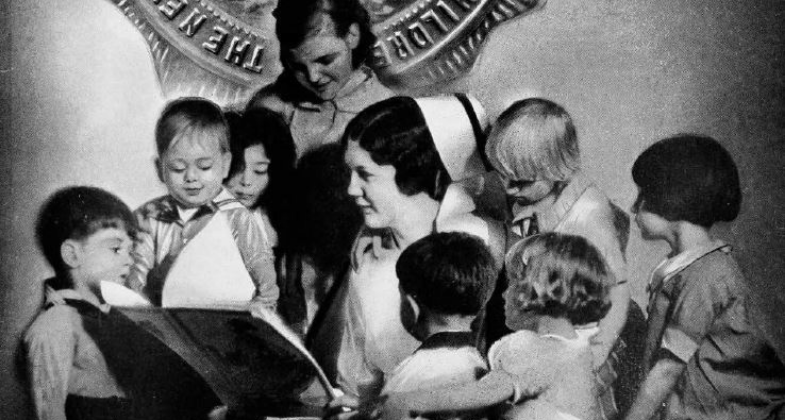 Click the links below to continue learning about The NYSPCC’s history or contact The NYSPCC Archivist at cfrank@nyspcc.org

The NYPSCC Archives serves as one of the nation’s most valuable repositories of original and compiled material on the child protection movement.

View The NYSPCC Archives Finding Aid and information on how to search the collection.

Click here to view The New York Society for the Prevention of Cruelty to Children's 125th Anniversary Booklet.

Donating $500 provides a two-hour training session to teach up to 30 teachers and child welfare professionals how to identify and report child abuse and neglect.